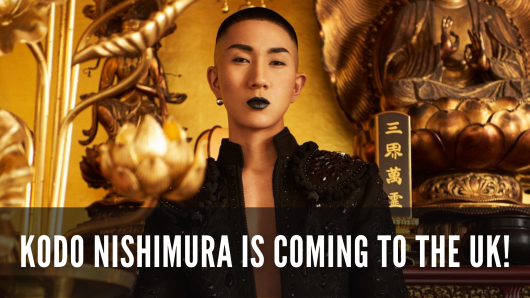 Watkins Media is thrilled to announce that Kodo Nishimura–internationally celebrated LGBTQIA+ activist, make-up artist and Buddhist Monk–is presenting a series of exclusive talks and workshops at Pantechnicon between the 14th and 20th of March, which will include the launch of the English language edition of his book, This Monk Wears Heels. Recently named a TIME Magazine Next Generation Leader, Kodo has shared his journey to self-acceptance and love globally, speaking at the United Nations Population Fund Headquarters in NYC, Microsoft, Facebook, L’Oréal Paris, P&G, and numerous universities, as well as appearing in the Queer Eye: We’re in Japan! special that aired to massive viewership on Netflix. Now he is bringing his inspiring journey to self-love and self-definition to Pantechnicon in a series of four exclusive events (all in GMT):

Filled with practical tips for positive thinking, insights into the philosophical approach to life Kodo has crafted as a Buddhist monk and detailing his journey to self-love, the book provides a gentle, loving, and encouraging voice for all those who dare to be different.

While there has been a proliferation of positive LGBTQIA+ representations in western media in recent years, eastern media has been slow to follow suit. During this intimate chat and reunion with Queer Eye: We’re in Japan! hero Kan (@kanyonce), Kodo and Kan will share how they are working to convince the older generations and LGBTQIA+ youth in Japan, as well as people around the world, to accept that it’s okay to be YOU–whomever you are!

A chat on Buddhism’s take on sexuality, inclusivity and self-identity, and how Kodo is working to use his platform to add his unique voice and perspective to conversations surrounding spirituality and LGBTQIA+ rights within the modern era.

An exclusive press event will be held on Monday, March 14th at Pantechnicon. To reserve your spot, or for further details, interviews and requests, please contact Laura Whitaker-Jones at laura.whitaker-jones@watkinspublishing.com and/or Jade Edwards at jade@pantechnicon.com. “We’re thrilled to partner with Pantechnicon to offer these exclusive events with Watkins author Kodo Nishimura,” shares Etan Ilfeld, Managing Director of Watkins Media. “Pantechnicon is a meeting place for Japanese and Nordic cultures through food, drink, retail & design, and as Kodo is similarly devoted to bridging the gaps in conversations surrounding spirituality and LGBTQIA+ rights within the modern era, Pantechnicon couldn’t be a more ideal event partner and host.” Kodo Nishimura’s travel is supported by Japan Airlines. ABOUT PANTECHNICON Pantechnicon was created as a way of sharing a passion for travel, design, and great food and drink. Like many who have visited the Nordics & Japan, founder Barry Hirst noticed the undeniable similarities between the two cultures and their values and wanted to create a place where this could be explored and enjoyed by all. The Pantechnicon name comes from the building, a Grade-II listed landmark on Motcomb Street, SW1, which was London’s original international arts, crafts and interiors bazaar. The word was created for the building’s opening in 1830 by joining the Greek words pan ‘all’ and technikon ‘of the arts’. With a focus on creativity and craftsmanship, six floors are divided into eight spaces inspired by the Nordics & Japan: Eldr Roof Garden, Eldr Nordic lounge, Café Kitsuné, Kiosk takeout spot, Sachi Japanese restaurant, Sakaya bottle shop, Edit gift shop and Studio fashion and homeware shop.